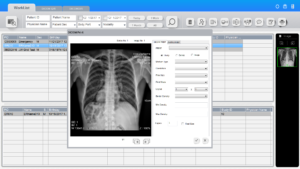 Digital Radiography (or DR) has become better known as digital x-ray, which captures image data without the use of screen-film or Computed Radiography (CR) cassettes and photo-stimulable phosphor plates. Instead, DR commonly utilizes flat panel detectors, which receive the radiation passing through the patient and converts it into a digital image displayed at a computer workstation within seconds. DR is quickly becoming the standard in the world of medicine.

The three main forms of DR technology include indirect, direct, and CCD (Charged Coupled Device). Indirect digital x-ray refers to systems that must convert incoming x-rays into light before being collected by a photodiode and then converted into an electric charge. On the other hand, direct digital x-ray refers to systems capable of converting x-rays directly into an electric charge. CCD refers specifically to systems that must record the x-ray and then perform a scan with a linear laser diode before the energy can be released and read by an array of CCRs.

There’s simply no shortage when it comes to the benefits of digital x-ray technology. These include, but are not limited to: