In Digital Radiography (DR), Moire is the appearance of wavy distortions in an image. It’s the result of interference between the antiscatter grid and the digital detector. Moire patterns are major physical effects that cannot be effectively removed by software. This makes proper diagnosis very difficult if not impossible.

Since antiscatter grids were developed in 1913, a major problem has been the grid strips that frequently appear in x-ray images (i.e. grid ghost), resulting in a risk of misdiagnosis by physicians. In 1920, Hollis Potter conceived a solution for this problem by moving the grid sideways across the film during exposure; the shadow of the grid strips are blurred out and therefore not visible. When Computed Radiography (CR) was introduced in 1966, Moire, appeared in x-ray images, degrading the quality of the images. Potter-Bucky trays were applied to fix this problem. In the early 1990s, when Digital Radiography (DR) began to appear on the market, the same technique was applied. However, using Potter-Bucky caused an increase of dose to the patients from the moving antiscatter grid. In order to decrease exposure, trials have been made using stationary antiscatter grids.

The Process of Moire Arising
With conventional x-ray film, the spatial resolution of the image depends on the spot size of the x-ray tube. With modern digital detectors, the maximum spatial resolution of the image depends on the resolution of the digital sensor. This restriction to resolution also applies to seeing the grid lines. This results in sampling error, where in some areas the detector pixels will be directly under the grid’s lead strips, under the spader, or partly under each. This means that the geometric relationship between the spatial frequency of the detector and the grid is very important to the quality of the image. 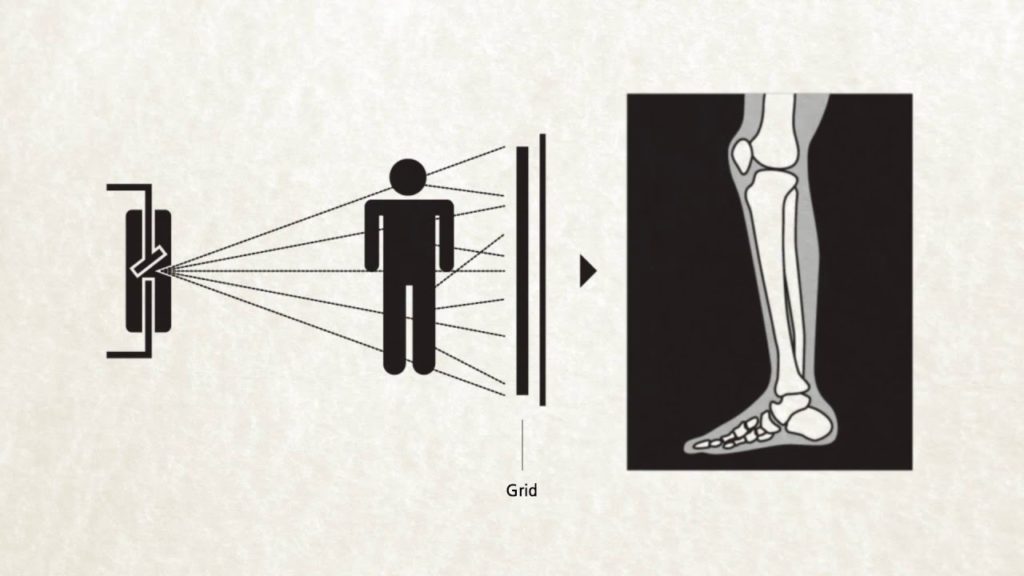 In early 1997, when Direct Digital Radiography (DDR) was first introduced, many attempts to improve moire were initiated. However, the wavy images created from antiscatter grids were not improved. The DDR system manufacturers had chosen the oscillating bucky system to remove the moire patterns from the image. Since the development of Indirect Digital Radiography (IDR) systems, stationary grids have been adopted despite their problems. The line frequency of the antiscatter grid was determined depending on the resolution of IDR. Even now, grid artifacts, such as grid line visibility (or “grid ghosts”), are appearing in the image is a severe problem for DR systems.