What Are X-Ray Grids? 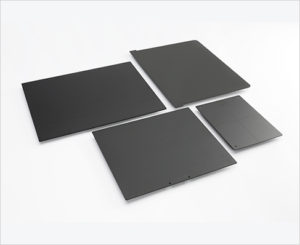 Whenever X-rays pass through matter, some of the x-ray photons will interact with the atoms of the matter. When taking an X-ray, may incoming X-ray photons are absorbed by the bone, a high attenuation material, while other tissues absorb less. This produces an image of dark and light on the X-ray film. This effect is like holding up paper to a light to see the writing on the other side. However, absorption is not the end. As part of the absorption, a second photon with less energy will be produced, flying off in a different direction than the photon that was absorbed. These “scattered” photons will create a random grayness on the image, reducing the contrast between body tissues, and making it difficult to read the image clearly.

Types of Grids
X-ray grids are divided into four kinds based on their designs. There are parallel types, focused types, crisscross types, and tapered types. A single grid can be more than one type.

Parallel Type Grids
A grid where the absorbing strips are parallel to each other in their longitudinal axis. Most linear grids are also focused (i.e. the strips are slightly tilted, converging at a line in space (the convergent line). A non-focused linear grid has strips that are parallel when viewed in cross-section; this is called a parallel grid. Many X-ray tables are equipped with linear, focused grids, and the strips in these grids are parallel with the long axis of the table, allowing the X-ray tube to be tilted in this direction without changing the effectiveness of the grid.

Focused Type Grids
A grid in which the absorbing strips are slightly angled towards the focal spot. The grid can therefore be used only at a specified focal distance (actually inside a narrow distance interval around the specific distance). Otherwise, the grid will absorb the primary radiation and parts of the film are barely exposed. Focused grids may be linear or crossed.

Criss-Cross Type Grids
A grid consisting of two superimposed parallel grids having the same focusing distance. Such grids are very efficient in removing scattered radiation but must be arranged at exactly right angle to the beam. Th use of such grids is therefore limited.

Tapered Type Grids
A grid that the surface is tapered into the center of grid, functioning similar to a focused grid. All of the strips are parallel to each other, and the tapered surface is toward the focal spot.